Like many innovations in 20th-century computing, hard drives were invented at IBM as a way to give computers a rapidly accessible “random-access” memory. The trouble with other computer memory devices, like punched cards and reels of magnetic tape, is that they can only be accessed serially (in order, from beginning to end), so if the bit of data you want to retrieve is somewhere in the middle of your tape, you have to read or scan through the entire thing, fairly slowly, to find the thing you want. Everything is much faster with a hard drive, which can move its read-write head very quickly from one part of the disk to another; any part of the disk can be accessed as easily as any other part. The first hard drive was developed by IBM’s Reynold B. Johnson and announced on September 4, 1956 as the IBM 350 Disk Storage Unit.

IBM engineers also pioneered floppy disks, which were removable magnetic disks packed in robust plastic cases (originally 20cm or 8in in diameter and wrapped in flexible plastic sleeves; later 133mm or 5.25in in diameter and packed in tough plastic cases). Developed by IBM’s Warren Dalziel in 1967 and first sold in 1971, they became hugely popular in microcomputers (the forerunners of PCs) in the late 1970s and early 1980s, but are now obsolete. With a storage capacity of only 1.44MB, they’ve been completely superseded by USB flash “drives” that offer hundreds or thousands of times more memory in a tiny plastic stick a fraction the size.

Artwork: The original hard drive. IBM engineers developed this groundbreaking magnetic memory (which, in IBM-speak, was called the DASD, pronounced “das-dee”), through a process of continuous improvement from the early 1950s onward and were awarded their final patent on the design in 1970. You can see that the basic read-write mechanism is exactly the same as in today’s drives: there are multiple platters (light blue) made up of individual sectors (dark blue) that can be written to or read from by multiple read-write heads (red) mounted on the ends of sliding actuators (orange). The platters are spun by a pulley and motor (green), while the actuators are driven by gears and a motor (yellow). The main difference between this drive and a modern one is the amazing amount of intricate machinery this one contained (which you can read all about in the original patent). From US Patent 3,503,060: Direct access magnetic disc storage device by William Goddard and John Lynott, IBM Corporation, March 24, 1970, courtesy of US Patent and Trademark Office, with colors added for clarity. 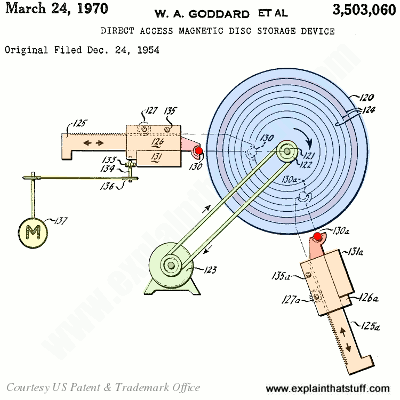 ACER Laptop Repair near me

ASUS Laptop Repair near me

DELL  Laptop Repair near me

HP Laptop Repair near me

Gateway Laptop Reapir near me

Lenovo Laptop Repair near me

SONY Laptop Repair near me

TOSHIBA Laptop Repair near me

MSI Laptop Repair near me

Alienware Latpop Repair near me

Fujitsu Laptop Repair near me

MacBook Laptop Repair near me

SAMSUNG Laptop Repair near me

Republic of Gamers Laptop Repair near me

Gaming Laptop Repair near me

Just around the corner from Irvine Spectrum